It is with great sadness that I write this tribute to a wonderful friend, not only of mine for almost 40 years, but a friend of an uncountable number of people throughout the world where there is so much love, admiration and respect for Shealagh as a breeder, exhibitor and international judge of Cavaliers and King Charles Spaniels. Shealagh died, at home, in the early hours of Tuesday 15th November following five months of a terminal illness. The North East of England has always been a haven for true friendship and Shealagh has always been there for so many of us over the years.

Shealagh loved all animals from being a very young child; in her early days she used to “ find “ dogs to bring home, much to her parents disgust. They bought her a pony, instead of a dog, on the understanding that it would not be expected to live in the house and so her passion for showing began. She competed, successfully of course, each weekend at gymkhanas and local agricultural shows. During her early adult years she worked both in the Civil Service and then in a local teaching hospital as a Medics Physics technician. I know that Shealagh thoroughly enjoyed this work but after her marriage to Harry and the birth of her son, Andrew and daughter Wendy, she moved to Burnopfield with her family to help her uncle Tom run his farm. Shealagh enjoyed milking the cows and driving the farm tractor.

Like many people who are denied having a dog as a child, Shealagh was determined to have one at home for her and her children and as we know there is no breed like a Cavalier that fulfils this better. So she bought a richly marked blenheim bitch,”Amber” sired by Pargeter Dusty Answer and a second bitch “ Heidi of Mayville”. Even in those very early years her Cavaliers were so well known for their fabulous rich, albeit heavily marked, colouring.

In those early days ( 1970’s ) a mentor of many Cavalier folk in the North East was Caroline Gatheral and as Shealagh always said Caroline talent-spotted Heidi at a local agricultural show, persuading Shealagh that she would have a lot of fun showing this bitch and so she did. Heidi was her foundation bitch and initially her pups were registered with her SWEETBRIAR affix. Following her move to Mill Farm, Chopwell, in 1979, she changed her affix to MAIBEE, giving her daughter Wendy the Sweetbriar affix. Wendy, this year, has registered her very first litter of pups using this affix, not of Cavaliers as one might have expected, but of Papillons.

Where does anyone begin to acknowledge the influence that Maibee breeding has had on the Cavalier world of dogs.
The first Cavalier litter bred by Shealagh was in 1972, this litter being sired by a richly marked blenheim dog “ Syretta Bracken” bred by Joyce Jay and owned by Pauline and Ian Sidgwick. This litter produced a richly marked blenheim dog, Sweetbriar Billie Joe who won well for Ann Irvine, winning a Junior Warrant and one CC and Billie Joe’s litter sister Sweetbriar Capricious Carrie who incidentally was the foundation bitch for Bill & Ann Moffatt’s Rytonion kennels. Sweetbriar Billie Joe was eventually mated to Astra of Maplehurst, the resulting litter producing Shealagh’s first Champion blenheim bitch Maibee a Misprint and a CC winning dog for Pat Calvert Maibee a Baronet.

Craigowl Dixon (Ch Lymrey Royal Reflection of Ricksbury/Ch. Craigowl Silkience) was to prove to be the most suitable choice for Shealagh in that he sired the most influential of Shealagh’s stud dogs – MAIBEE MONTROSE. “ Taylor “ was lightly shown as a youngster; it was as a stud dog that he came into his own. He is the sire of the current breed record holder Ch. Keyingham Branwell, also the sire of many other English, American and German Champions. Shealagh has bred seven beautiful blenheim Champion bitches and more recently bred the multi CC winning dog Ch. Maibee Make Believe this being her first male Cavalier Champion. “Hairy” won his first CC at the tender age of 9 mths old, then a further two more before he reached his first birthday and now aged 3 yrs old has a total of 31 CC’s. “Hairy” has sired Shealagh’s latest Champion dog, Ch. Lanola Siesta of Maibee owned by Shealagh and bred by her good friend Stephen Goodwin.

One of Shealagh’s proudest moments was when the Cavalier King Charles Spaniel Club, in 2009, celebrated their top dogs in a Parade of Champions at their Championship show. Montrose was again Top Cavalier Stud dog, Top Toy Stud dog and fourth top All Breeds Stud dog in the UK. After the Parade of Champions was finished Shealagh was invited to take Montrose on a lap of honour in recognition of his outstanding stud dog achievements. The wonderful applause and the standing ovation he received was unbelievable.

On that day Shealagh won

. a huge minor puppy with Make Believe at his first show,

. the bitch CC with Maibee Shine On and

. the Dog CC and B.I.S. with Ch. Lanola Santana of Maibee

This was a day that many of us dream of and a day that Shealagh would never forget.

As one of the most successful breeders of King Charles Spaniels for almost 35 years, in partnership with Joyce Robins, ( Maplehurst ) Shealagh has bred or owned more than 30 Champions. Joyce Robins told me that her first meeting with Shealagh was at UK Toy Dog Championship show 35 years ago. Joyce had taken Maplehurst Sebastienne to the show as she was to be sold to a young Irish exhibitor. He considered her to be too big. Shealagh, who had been talking to this young man, fell in love with this blenheim and bought her. Sebastienne became her foundation bitch and so began a long and lasting friendship and eventually partnership, that never wavered, between Joyce and Shealagh. They and their breeding, based on the Zepherine kennels of Joyce Birchall’s, have been a force to be reckoned with for all these years. Shealagh also had very much admired the Tudorhurst King Charles Spaniels bred by Mrs Alicia Pennington. In the early days Maplehurst Sebastienne was so important to Shealagh’s breeding programme as was Ch. Maibee Carolina whose influence is still evident in her Charlies today.

Shealagh’s first King Charles Champion was a blenheim dog, bred by Joyce, Ch. Maplehurst Romeo; he was twice BOB at Crufts and her first homebred Champion was the tricolour bitch - Ch. Maibee Carolina.The blenheim dog Ch. Maplehurst Romeo, the ruby Ch. Larkrise Red Robin and the prepotent tricolour Ch. Maibee Clayton have all contributed to the qualities seen in Maibee dogs today. “Clayton” was undoubtedly such an infuential particolour stud dog, producing either Champions or CC winners in most of his litters. The ruby Ch. Larkrise Red Robin is behind so many quality whole colours of today, mine included. These dogs have had a lasting influence in the breeding programmes of other kennels. It should be remembered that Maibee / Maplehurst breeding in King Charles Spaniels have won CCs at Crufts in each of the four colours and were the first post war kennel in this country to have owned and bred Champions in all four colours. Shealagh and Joyce also had the distinction in the mid 90’s of winning the Our Dogs Top Toy Breeders award three years in succession.

Ch. Maibee Absolutely Fabulous also has had a strong influence, being top sire for two years and at ten years of age sired a litter of three Champions for Shealagh – Ch. Maibee Leyla, Ch. Maibee Leah and for David Anderson & Ian Watt Ch. Maibee Lola of Nisyros. Also bred by Shealagh and owned by David and Ian is the breed’s lastest Champion bitch - Ch. Maibee Dominique. Shealagh would have been so proud to know that her tricolour dog puppy Maibee Mr Kipling ( Eli to his friends ) is joint top puppy for 2011. As we move to the end of 2011 we can look back on the influence that Shealagh’s thoughtful breeding of Maibee Teddie ( sired by Barbara Plews Tewhit kennels) has had in siring Ch. Maibee Theo, the tricolour lad who is currently top King Charles Spaniel and who has represented the breed, so ably handled by Tania Ireland, to many Toy group placings. The most memorable & proud moment for Shealagh this year was at Birmingham Championship show in August when Theo won Best of Breed and then went on to win the Toy Group. A few weeks after this win I sat with Shealagh, Bill Tanya and Wendy whilst we watched the Dog World video of Theo achieving this very special win. Even though her health was not good, this gave Shealagh such a boost.

With Shealagh’s help and advice, which was always given freely and willingly, other breeders and exhibitors have benefited and had success with their King Charles Spaniels. I well remember Shealagh advising me to have a litter from my first home bred ruby bitch after she won her first CC. “ Put her away, let her enjoy motherhood and bring her back out when she has bodied up”. This I did and I was fortunate to gain two more CC’s making Ch. Lorphil Red Lace my first Charlie Champion. Naturally the breeding, behind Spice for three generations was Maplehurst and Maibee and this breeding has given me much success with my current Charlies.


Shealagh, up until her death, was Chairman of the King Charles Spaniel Club and Treasurer of the North East of England Toy Dog Society. Shealagh first began judging in 1979, and with her husband Bill Moffatt, who supported Shealagh in all that she did, has judged all over the world, including judging King Charles Spaniels at Crufts in 2001.

Shealagh and Bill have shared many interests over the years they have been together – both excelling in cooking, being perfect hosts to friends and family, enjoying many a weekend escape to London – Shealagh shopping whilst Bill would be booking a Theatre visit. They both thoroughly enjoyed listening to good music and for those unable to attend Shealagh’s funeral on Thursday 24th November at 12.30pm at Mountsett Crematorium, Dipton, Co. Durham, please listen to a piece of music that will be played during the service – Russell Watson’s version of “ You Raise me Up”, so very appropriate.

Dear Shealagh – we will all miss you terribly, you will be forever in our hearts, remembered with great pride and never forgotten. Lorraine.

Ch. Maibee Roselyn at Lovetrac - the lovely 'Brownie' is 10 today 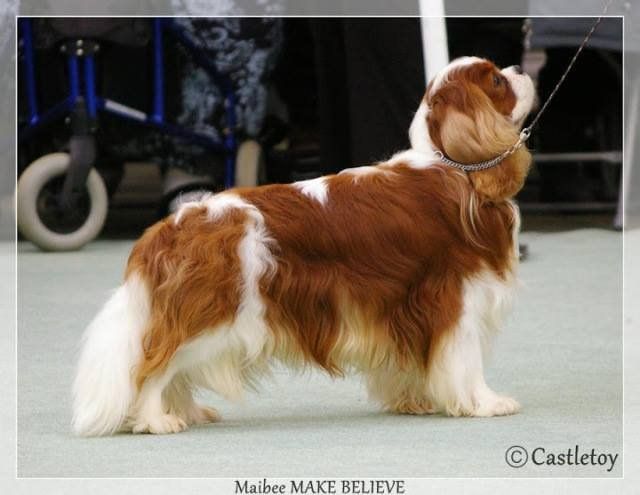 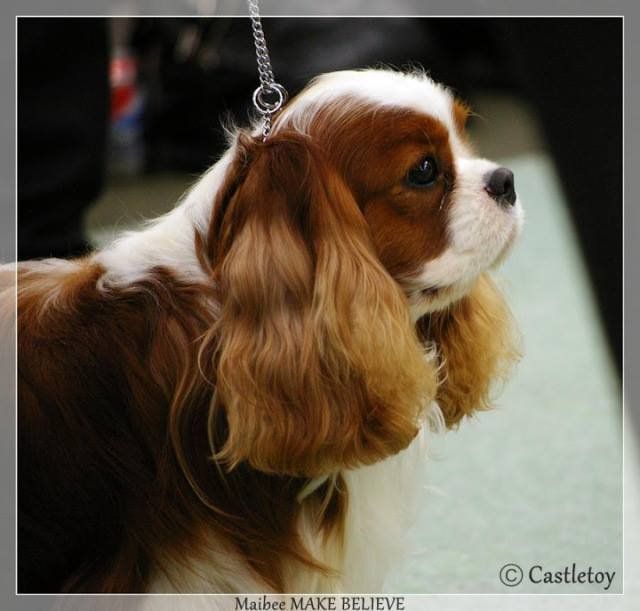