HUMBLE BEGINNINGS….
Gordon and I, despite pleadings as children, were denied the opportunity of having a dog. Instead making do with Budgerigars, Hamsters and Goldfish! So we had a lot of time to make up for. Early in 1972, shortly after we were married, we acquired a Blenheim bitch, Melbar Anthea, (Amber) who was mainly old Pargeter breeding. Like most, our first Cavalier was purchased as a pet and companion. Our choice did not result from research into what type of dog would suit our circumstances but it was simply a case of love at first sight! We were smitten and little did we know then that Amber’s arrival was to shape our lives for the next 4 decades.
We are both Scottish and living in Scotland then, joined the Scottish Cavalier Club shortly after getting Amber and went as spectators to one of their Championship shows. We were like kids in a candy store. How wonderful we thought to see so many Cavaliers in one place. There must have been nearly 100. The idea of showing amongst all those “professionals” did not occur to us as we were too busy enjoying every moment of having Amber. She went everywhere with us and in those days, 40 years ago, we had no car so that meant public transport. She was included in most everything we did.
We soon fell into the trap of thinking that Cavaliers should be at least in pairs so in 1973 we added a Ruby puppy, Pamojill Tabwentai as a companion for Amber. We called her Honey and her father was a tri, CH Mr Softie of Pantisa. Her breeders, the Stewarts from Edinburgh, suggested we might like to show her when she was old enough but we never gave that too much consideration at the time. As months passed we recalled the showing suggestion and so as ill equipped novices, off we trooped to the Scottish Club’s Members’ show where Diana Schillizi (Chacombe) was judging. Despite the hindrance of Gordon being on the other end of the lead, Honey came 2nd in her class. From that moment we were hooked. It was really to get the opportunity to see Cavaliers in large numbers that we eventually started entering Championship shows and soon we were travelling up and down the country and even venturing into England! Honey although never winning any major awards was able to hold her own in strong competition.
When the time came to plan our first litter we wanted the best for Honey and in November 1974 we chose the Black/Tan stud dog Rhosnessney Prince Ivan of Rhybank who was to play an important part in the betterment of the wholecolours in the UK. We kept 2 dogs from the litter, a ruby and a black/tan that we showed as puppies with moderate success. However having chosen to pursue this hobby we decided that in order to progress in the show world it is necessary to keep only as good, if not better than the parent. So, good homes were found for the puppies. Another attempt with a different stud dog still did not throw up the quality that we wanted. As the concept of dog breeding is to improve your stock you must be ever watchful that you are not going backwards. This wasn’t going to be as easy as we thought! Back to the drawing board!!
Having chosen the path our lives were to lead we decided to look to improve our prospects in the show world. Having admired the Homerbrent dogs, we approached Molly Coaker and eventually, after pestering her remorselessly, in 1977 we obtained Homerbrent Sun Fleur- a pretty, heavily marked Blenheim daughter of Ch Homerbrent Samson. She was to set us on our way by winning 2 Reserve CCs. She was mated to the tricolour Homerbrent Flash Harry. Gordon’s ambition to have a tricolour outweighed my choice to use the then young, Homaranne Caption. The pick of the litter Craigowl Patrick Popcorn we showed with success.
Shortly after this in 1979 we moved to the South of England and once settled, decided to expand our kennel of bitches with a view to breeding out own lines. We had seen the prettiest puppy in the ring, Homerbrent Honesty but on enquiring were told she was not for sale. Our persistence paid off and at the age of 13 months she came home with us. The other line that attracted us was Kindrum, having admired Kindrum Roulette and his offspring. As Honesty’s grandfather was Ch Rosemullion of Ottermouth and he was Roulette’s sire we felt that not only type but the lines were compatible. Pam Thorhill to our delight agreed to let us have Kindrum Clover whose ancestry included Ch Homerbrent Caption. With these 3 Blenheim bitches, Sun Fleur, Honesty and Clover we were all set to make or break it as breeders!
Craigowl Cashmere

Craigowl Cashmere
In the summer of 1981, we decided to mate all three, all within a week of each other! Sun Fleur was put to the dog Molly had recently acquired from Ireland, Ronnoc Rhum of Sancem, Honesty to Ch Homaranne Caption and Clover to Kindrum Roulette. . In mating all three we ran the risk of wall to wall puppies, we were relieved when they presented us with 3 puppies each. We kept three. Craigowl Rumour, Craigowl Storm of Homerbrent and Craigowl Fantasy. We were on our way!. Rumour was slow to mature and we were persuaded to part with him to New Zealand. In some ways we regret this as Sunfleur did not produce anything as good in later litters. It was through Fantasy that were to link the family lines. Having been more than satisfied with Storm, we mated Fantasy to Caption which gave us Craigowl Cashmere….our Ist CHAMPION in 1984. We had arrived!

Craigowl Storm of Homerbrent was already fulfilling her potential, winning her Junior Warrant and by the age of 2 and a half was sitting on 2 CCs. (3 are needed for UK Champion). At 3 years old we decided to mate her to Ch Homaranne Carson, a son of Caption, despite the protests from many who said she would never come back to the ring after a litter. But she did, and was back in the ring winning before her puppies were 6 months and went onto gain her title giving us CHAMPION NUMBER 2.
In the meantime, we had taken the chance of lightning striking twice in the same place and Honesty was mated to Caption once more. Two stunning dogs were in the litter, Hoodwink and Hopscotch. The formula was working. So it was no surprise that we should try another close line breeding in mating Hoodwink to his half- sister Ch Cashmere. From this union Ch Craigowl Replica was born –CHAMPION NUMBER 3. The brothers, Craigowl Hopscotch of Homerbrent and Craigowl Hoodwink were slow to mature but they were lasters and both got their titles in middle age. A friend put it perfectly when she described them as the Peter Pans of the Cavalier world. They improved with every passing year. They made CHAMPIONS 4 AND 5. Having gone this far into close line breeding, the time had come to introduce an outcross. We did this through Replica’s litter sister, Chiffon, who was mated to Ch Salador Crismark. The result was Craigowl Chad a very useful stud dog who provided us with CHAMPION NUMBER 6, Ch Craigowl Silkience, one of the prettiest bitches we have bred. She gave us one of our proudest moments when she won the CC at Crufts in 1992. Her son Craigowl Dixon won 1CC AND 1 RCC and is probably best known for siring the world famous Maibee Montrose. During the mid to late 1990s our successes were moderate in comparison to the preceding decade and it underlined how difficult it is to consistently breed top winning dogs. We mated Dixon to a Chad daughter to produce Vanilla Ice, a blenheim bitch who was subsequently mated to Ch Trirayne Alexius the Great, a son of the influential Ch Toraylac Joshua. A dog from this litter became our7thCH HAAGEN DAZS OF CRAIGOWLchampion, Haagen Dazs of Craigowl, who was made up in June 2000.Later Dazs did a lot of good in Europe when he went to stay in Holland and Germany. It will now be apparent that up until this point the dominant figure in our breeding programme was “Caption”, a dog with such an aura that you could almost reach out and touch it. Such magnetism. Regal. gentle, roguish, so many qualities all rolled into one. As a producer and prepotent sire he stands alone. He produced 16 champion children in the UK and figures behind most of the successful kennels such as Ricksbury, Telvara, Lymrey
So the new Century started successfully in the show ring but on the breeding front, we had experienced problems with some difficult whelpings and looked to introduce some new blood. As a result of our friendship with Shealagh Waters and Bill Moffat, we were able to acquire Maibee Vienna, a tricolour bitch, who was to win 2 RCCs and become a significant part of the Craigowls of the 21st century. We also swapped a stud service with Shealagh. We used her tricolour, Maibee McLaren on Craigowl Pretzel, another daughter of Alexius the Great, and Shealagh used our Craigowl Dixon. We both gained substantially from this arrangement. Shealagh had the blenheim dog, Maibee Montrose from her bitch, while we had a tricolour bitch, Craigowl Jennifer from Pretzel. Although neither Montrose nor Jennifer were to be showring successes, they were very influential in the continuing success of both Craigowl and Maibee, underlining that dog breeding is a long term project. Montrose continues to be one of the most successful current stud dogs, while Jennifer turned out to be our "golden goose".
From her first litter to a son of Vienna, came Jarrow, Jesmond and Clara Vale, all tricolours. After successful puppy careers in the UK, Jarrow and Jesmond went to the USA. Both became champions, with Jarrow in the top 3 or 4 nationwide. Clara remained and continued to be a useful brood. Jennifer's second litter, to Miletreee Nijinsky (now a champion) gave us Craigowl Billy Elliot, our eighth champion. He was our first tricolour champion and our most successful show dog to date. His Best in Show win at the 2005 Cavalier Club Show, beating over 500 others, was our proudest moment since Silkience’s Crufts win in 1992. Billy ended 2005 as 2nd top cavalier in the UK and a young tricolour bitch, Craigowl Vivienne was 2nd top puppy bitch.

Am. Can. Ch. Craigowl Valparaiso

Craigowl Out Of The Blue

doing a bit of searching in cupboards today and came across this picture of Homerbrent Honesty of Craigowl, BORN IN 1979, one of our foundations bitches. ."Honey" was the dam of 3 UK Champions and a RCC winner...By Farne Silver Shadow of McGoogans ex Ch Heidi of Homerbrent. Her children were Ch Craigowl Hoodwink, Ch Craigowl Storm of Homerbrent, Ch Craigowl Hopscotch of Homerbrent and Craigowl Hovis for Symra. She was pure gold who started a generation for us. The quality and competition in the ring was extremely keen in the 80s (she won a MINOR PUPPY BITCH class of 53 at the CKCSC SHOW IN 1980) and to have a bitch who could produce such excellence was quite a triumph....and another daughter, Craigowl Prudence at Ravenrush started another dynasty in the USA...

CRAIGOWL OUT OF THE BLUE

Am. Can Ch. Craigowl Valparaiso who is 13 years old today. Vinnie was bred by Norma and Gordon Inglis of Craigowl and owned by Patty Kanan Cindy Huggins and myself. He is by Maibee Montrose out of Maibee Venita of Craigowl. The pictures are of him as a younger dog; around a year and when he was around 5 years. 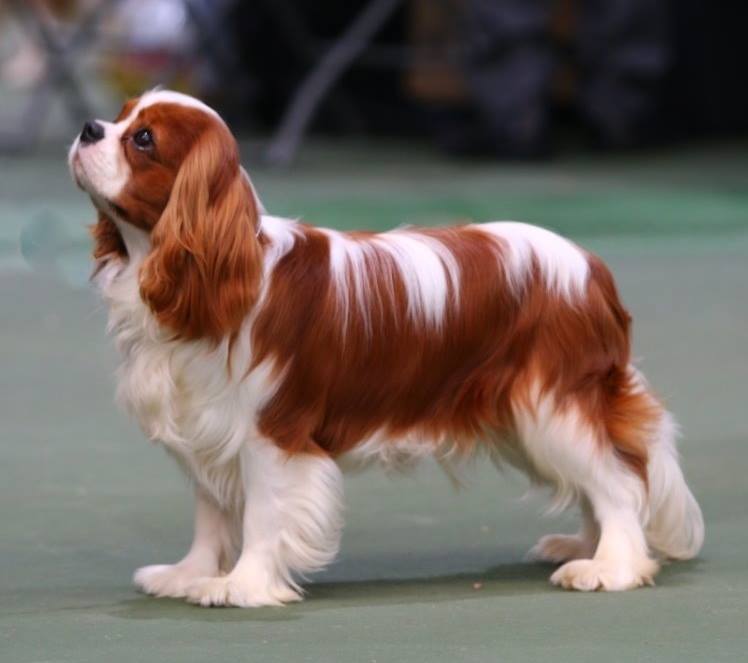 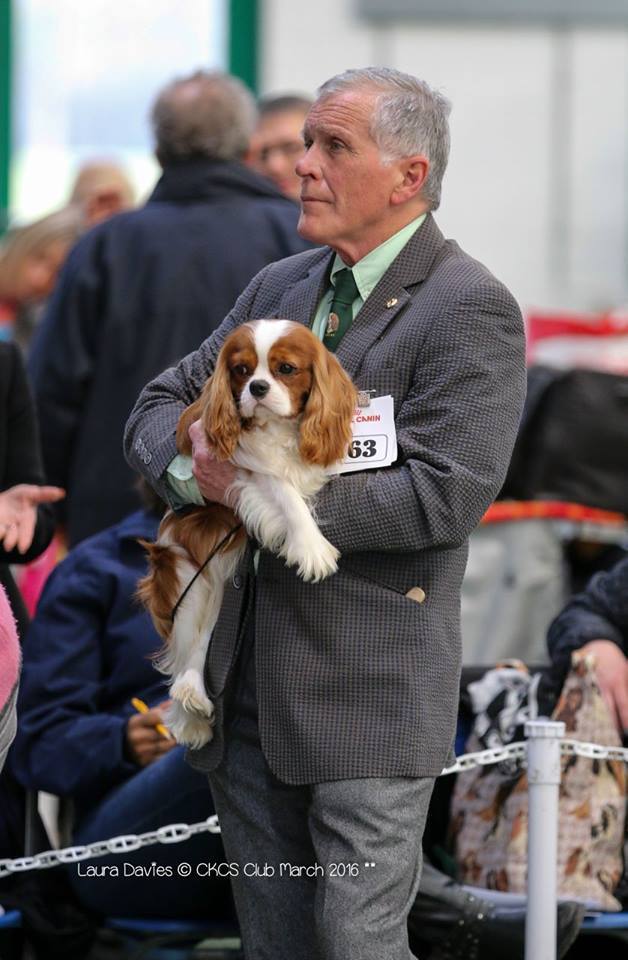